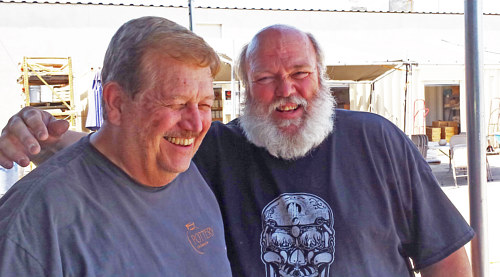 Me and Don Ellis.  He's the one with the beard.

Jack was a teacher of over 36 years who is retired.  He still teaches ceramics classes for mature adults.  He sought a career in Aerospace and Aeronautics, finding himself in a dead-end job with NASA he went back to University.  Upon graduation he took a position as a public school teacher and to his great surprise, he LOVED it.  He taught all grades from 7 – 12, with an emphasis in Psychology and Social Studies.  He gathered up many academic degrees.

He was born in Los Angeles (he likes to say that he is 21 with 60 years of experience) and attended schools in South Gate and Hollyday (Downey). His family moved to Glendale in his sophomore year and he graduated from Glendale High. RAH!  After going back to college (football scholarship) he met Vera and they had three boys.  The children have become independent leaders of their own families and have become contributing members of society.  (we like ‘em)

Jack left fulltime teaching in 2002 and took up Ceramics to ward off boredom and it became his passion.   It is said that if you were to cut open his veins, red clay slip, not blood, would come out.  He studied at Citrus College and studied under various and most wonderful masters in various workshops.  Some of his mentors are: Don Reitz, Tom Coleman, Frank Mazzarella, Joe Soldate, Julia Galloway, Randy Broadnax, Don Ellis, Robbie Lobell, Verginia Scotchie, Pat Crabb, Ross Thompson and Jim Romberg.  He is also indebted to his fellow artists who have generously given of their inspiration and craft secrets.